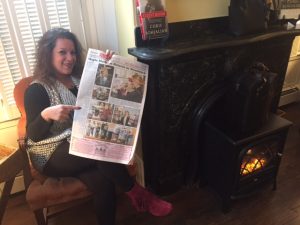 Thanks Vermont Standard for the incredible writeup!

I had the pleasure of Judging this year’s 2017 Maple Madness Competition in Woodstock, Vermont. For a woman who chose to live in the concrete jungle, I must say, I really enjoy the Vermont life. It was a very snowy March still in Woodstock, but that did not stop my mom and myself from driving up to the beautiful Ardmore Inn to spend the weekend in Woodstock.

The Ardmore Inn is one of my favorite bed and breakfasts to stay at. It’s quaint, quiet and filled with books, charm, and plenty of goodies to snack on! Charlotte, the Inn Keeper is a wonderful host who you will connect with instantly. She knows here way around Woodstock very well and will fill you in on all the best that is happening that weekend.

For the full review on this adorable Bed and Breakfast, click HERE.

Maple Madness weekend is filled with some fun events including a Sugar on Snow and Maple Popcorn tasting in the towns green space. At first, I was surprised to find that “Maple Snow” aka Sugar on Snow was simply hot maple sugar topped (actual) snow; when in Vermont, do as they do! I enjoyed this way too much because it was like making my own special maple candy! I also quickly became addicted to the hot Maple Butter Popcorn, which was a fun treat to snack on by the fire pit, while chatting with some

Vermont locals. The beauty of the weekend is of course the making of the famed Vermont Maple Syrup, and during this time you can go and witness this sweet stuff being made!

At night, the Maple Madness continued with a Taste-A-Round at Suicide 6 Ski Slopes. Here many of Woodstock’s well known restaurants, maple syrup producers, and surrounding area restaurants whipped up some of their best dishes to share with locals, tourists, and judges like myself! This was my first year judging the Maple Madness competition, and I was honored to be picked. I tasted my way through the entire event, and had quite a few that left a delicious impression on me: 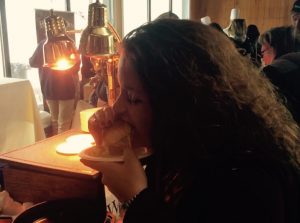 The Prince and The Pauper: Maple Cheesecake 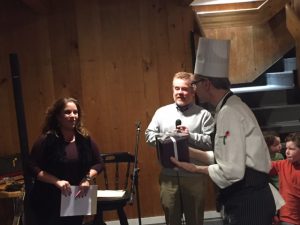 Wondering who was the winner? Well, because I had to choose between sweet and savory, and there were so many delectable entries, I chose to have a few honorable mentions before announcing the judges choice. Singleton’s’s Maple Chili was the first savory honorable mention, because the chunks of smoked meat in the chili was a nice touch texturally and flavor wise. I also chose the Quechee Club’s maple cured salmon gravlox, due to it’s upscale nature, beautiful presentation, and subtle but present maple flavor. For the sweet entires, Simon Pearce won my palate with their maple crème brûlée, as did The Prince and The Pauper with their maple cheesecake. The winner of the

Maple Madness Food Competition was of course, The Woodstock Inn! Chef Rhys Lewis won my heart and my palate with his BBQ beef brisket, maple mustard, and maple slaw sandwich. Chef Lewis also got to take home a Simon Pearce Maple Pitcher, as the prize for winning the Maple Madness food competition.

Maple Madness happens annually and I highly recommend heading up there next year for maple sugar making, snow mobile racing, and maple food fun! This was my first year up there for Maple season, and I already can’t wait to go back. Thanks again to Woodstock, VT for hosting me as the Maple Madness Food Judge for this year’s competition!

About the Author: Sara Lehman

This site uses Akismet to reduce spam. Learn how your comment data is processed.